Every now and then I’ll discover an ingredient that I simultaneously desire and fear. It looks so beauuuuuutiful and deliiiiiicious in those food blog photos… but I have no idea how to cooook it or let alone pronouuuuunce it.
Step one: Phonetics. Keen Wah.
Step two: Consult with my super sexy vegetarian friend Kate, who tends to be more experienced than me in nearly every aspect of life. (Funny how that actually describes two Kates I know.)


Kate shared a recipe that was at once intimidating in its unusual ingredients and enticing in its use of the aforementioned desired/feared ingredient. I was on the phone with her the whole time I chopped, cooked, assembled and ate. What a support system!
I’ve since made this on my own half a dozen times, so I’ve made a few tweaks to my taste. There is nothing here to fear. I promise. 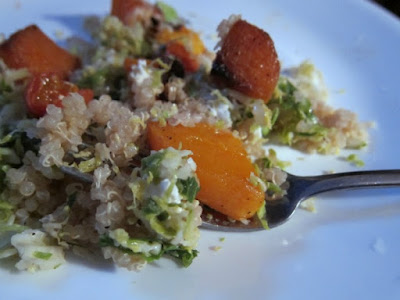 Yield: 2 servings
Ingredients2 cups quinoa, cooked according to package directions (Kate’s tip: cook it in broth – chicken or vegetable – and if you have a chance, buy the kind that’s pre-rinsed so you don’t have to bother with that)1 small butternut squash, peeled, seeded and diced into bite-size cubes (Mim’s tip: buy the pre-cubed kind)2 Tbsp olive oil, divided8 or so grape tomatoes, halved1/2 cup sliced brown mushrooms (I like a lot of mushrooms so I double that)1 shallot, sliced2 cups Brussels sprouts, sliced into shreds1 Tbsp rice vinegar2 ounces goat cheese½ small avocado, cubed
Toss cubed butternut squash with 1 Tbsp oil and roast in 350 degree oven for 20-30 minutes until golden brown and cooked through. Toss halved grape tomatoes in with the squash 15 minutes before squash is done.
Over medium heat in a large sautee pan, cook shallots and mushrooms in remaining oil for 3-5 minutes until soft, then add shredded Brussels sprouts and vinegar. Cook until sprouts are wilted and mixture is fragrant and browning.
Scoop half the warm quinoa, half the roasted squash, and half the sprouts mixture into a bowl, top with half the crumbled goat cheese and avocado. Save the other half for lunch tomorrow.